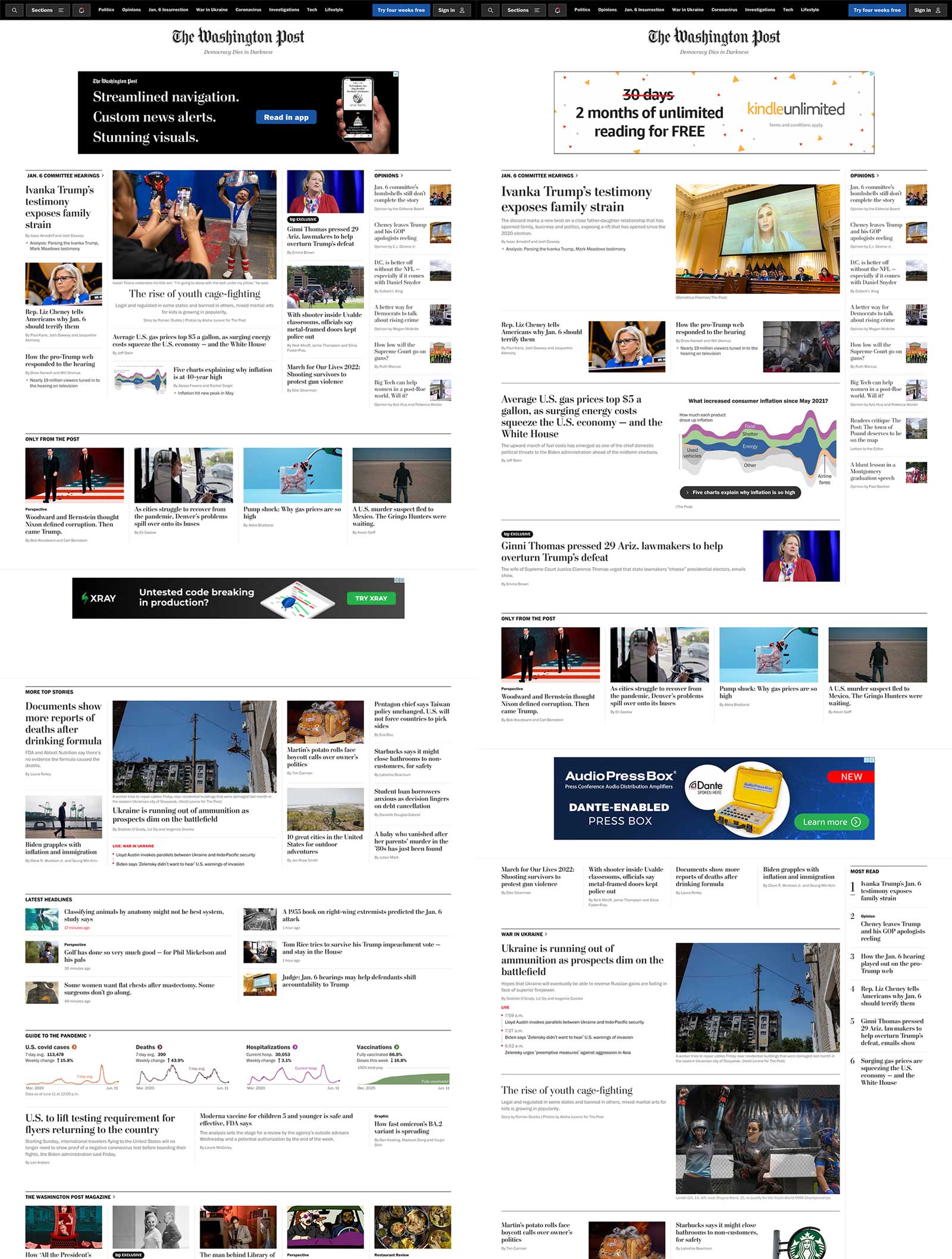 In 2022, I led the effort to convert The Post’s homepage from a more traditional column-based layout (left) to a modern, mobile-first design (right). This effort included partnering with Product and Design, working with senior editors to establish new curation guidelines, and training homepage editors on how to use the new design system. 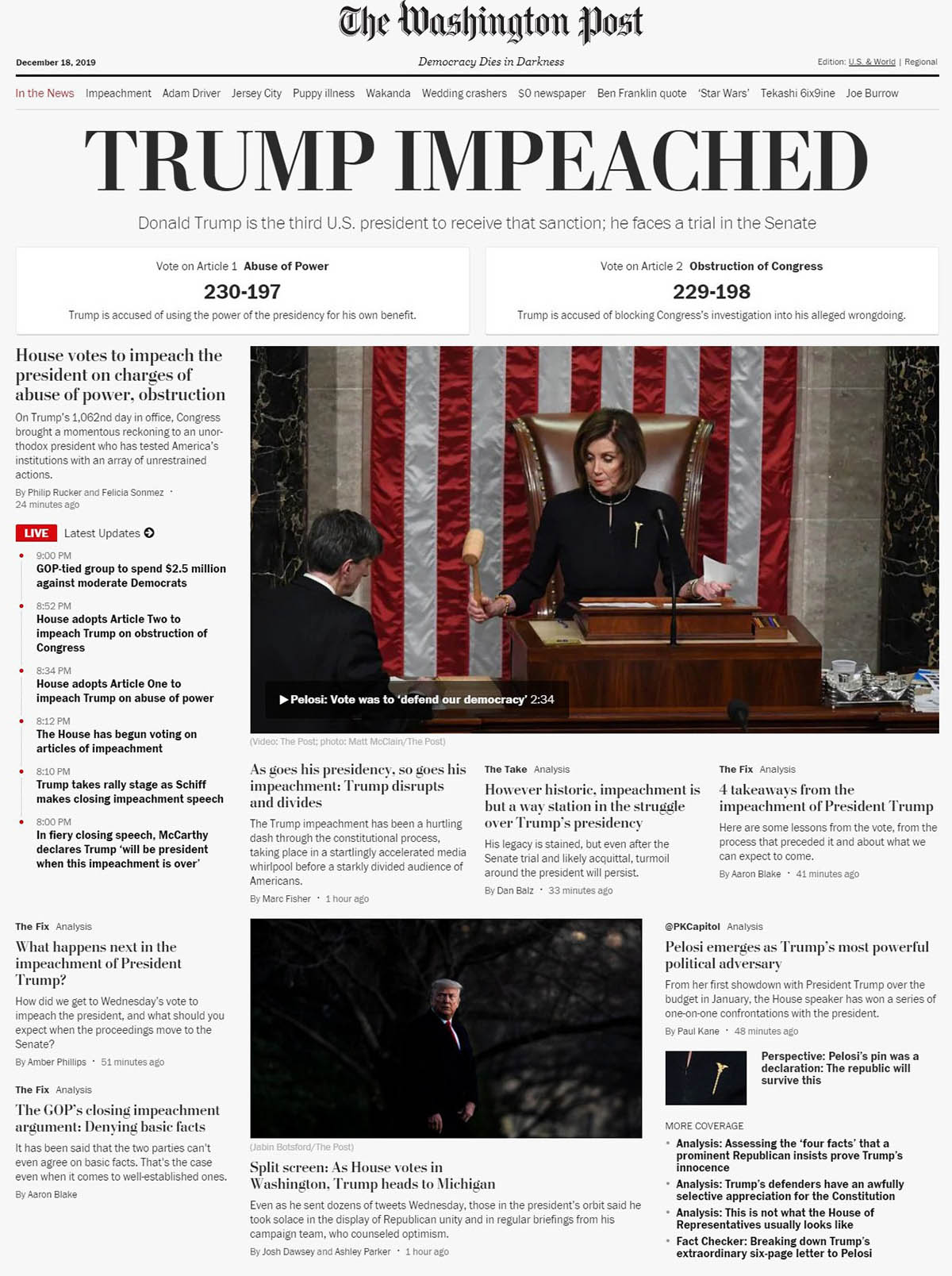 The House’s vote to impeach President Trump was a monumental day in Washington. Here’s how The Post presented its coverage of the historic moment.

In 1919, a giant tank filled with syrup ruptured in one of Boston’s busiest neighborhoods. Read the story I wrote about the fatal accident on its 100th anniversary. 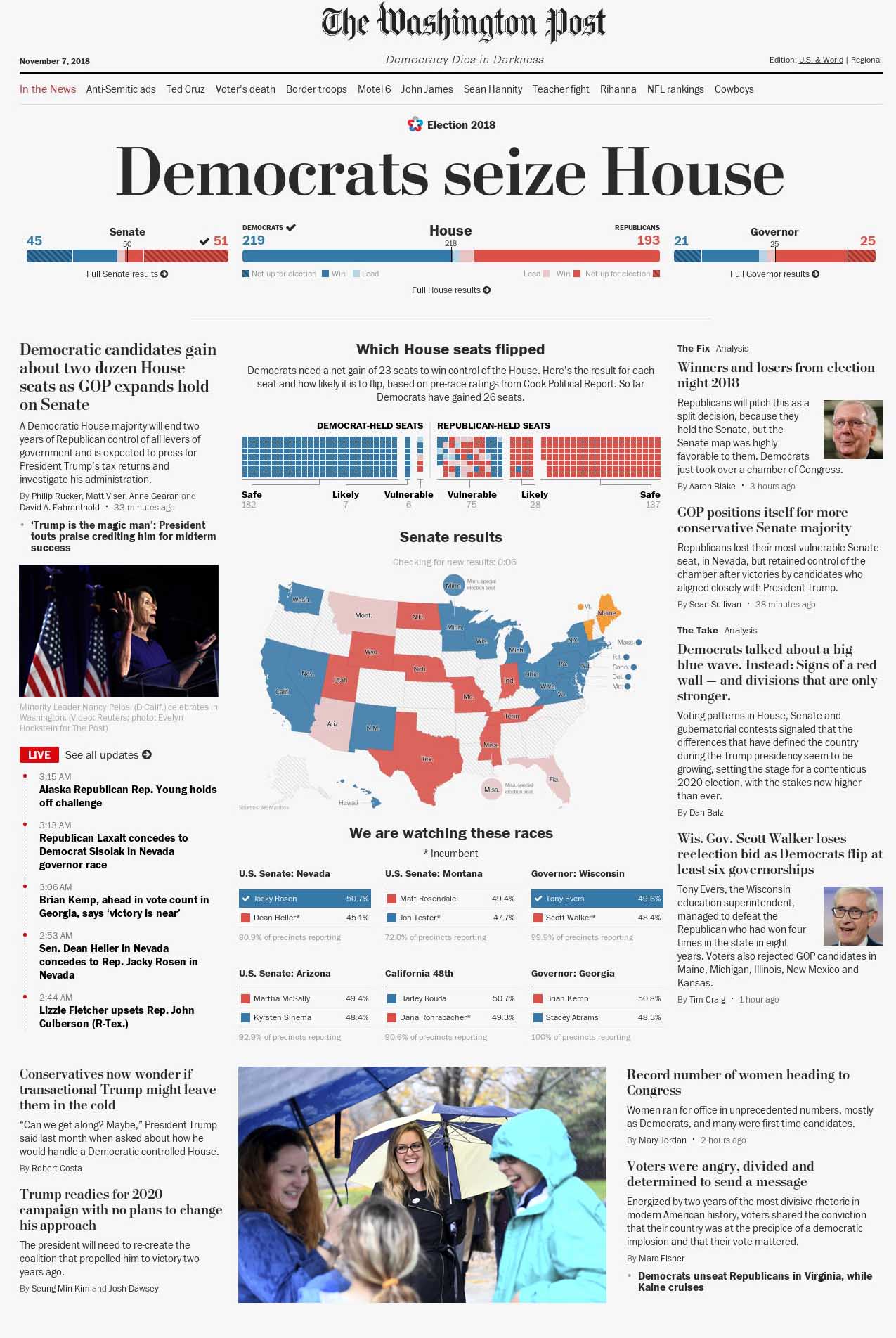 A snapshot of the homepage on Election Night 2018. I managed the layout of this page throughout the night, but my work had begun months prior. What you see here is the result of close collaboration with data journalists and engineers to ensure that our results would be nimble, revenant and unbreakable. And I can’t forget the seemingly endless hours of preparation I put in. In the end, it was a great success. 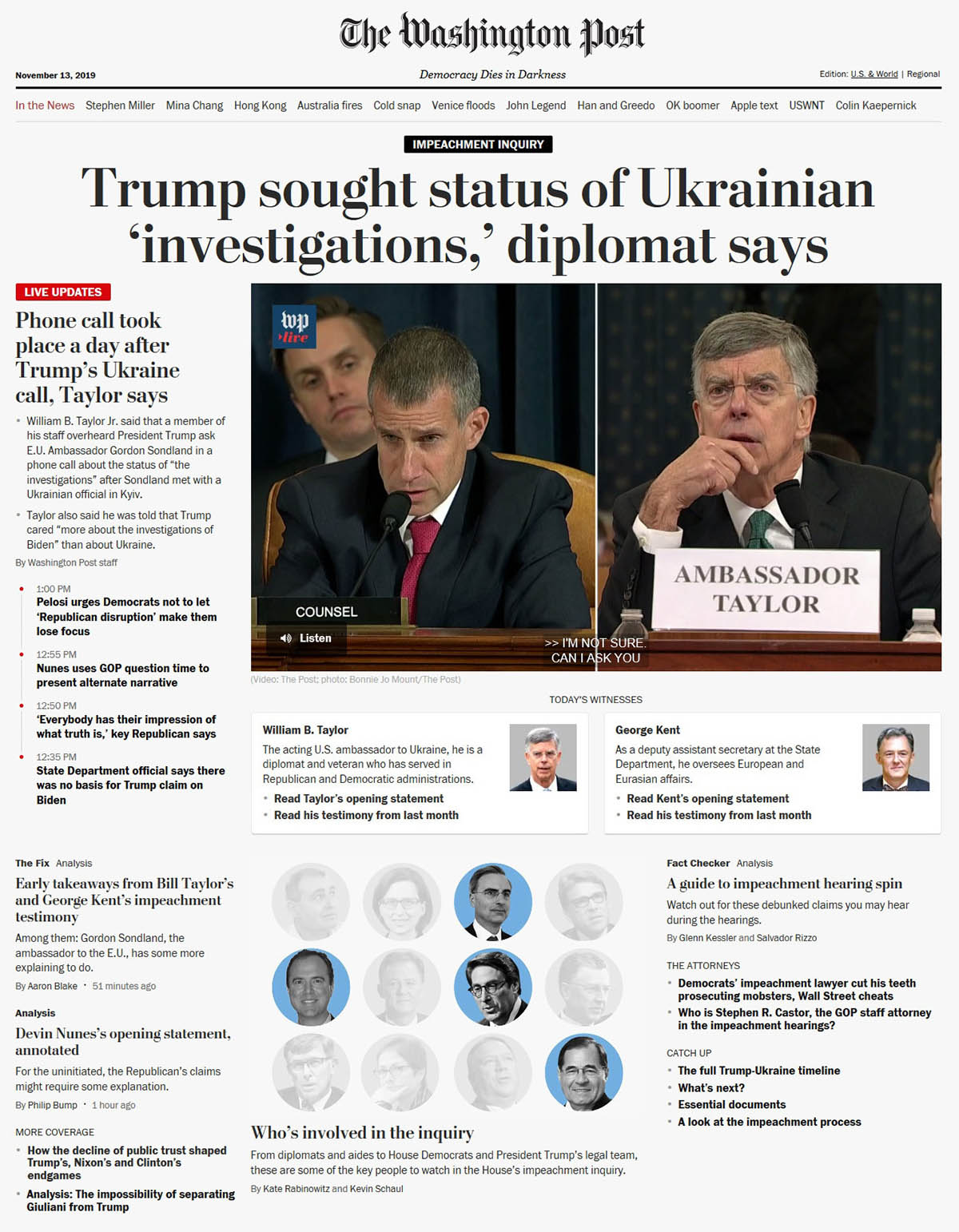 The explosive revelations from testimony in the House’s impeachment inquiry tested the homepage team and its ability to keep up with the live news. Here’s a snapshot from the first day of testimony.

A confidential trove of government documents obtained by The Post revealed that senior U.S. officials failed to tell the truth about the war in Afghanistan throughout the 18-year campaign, making rosy pronouncements they knew to be false and hiding unmistakable evidence the war had become unwinnable. This presentation includes a custom-coded document explorer and a quote stepper. 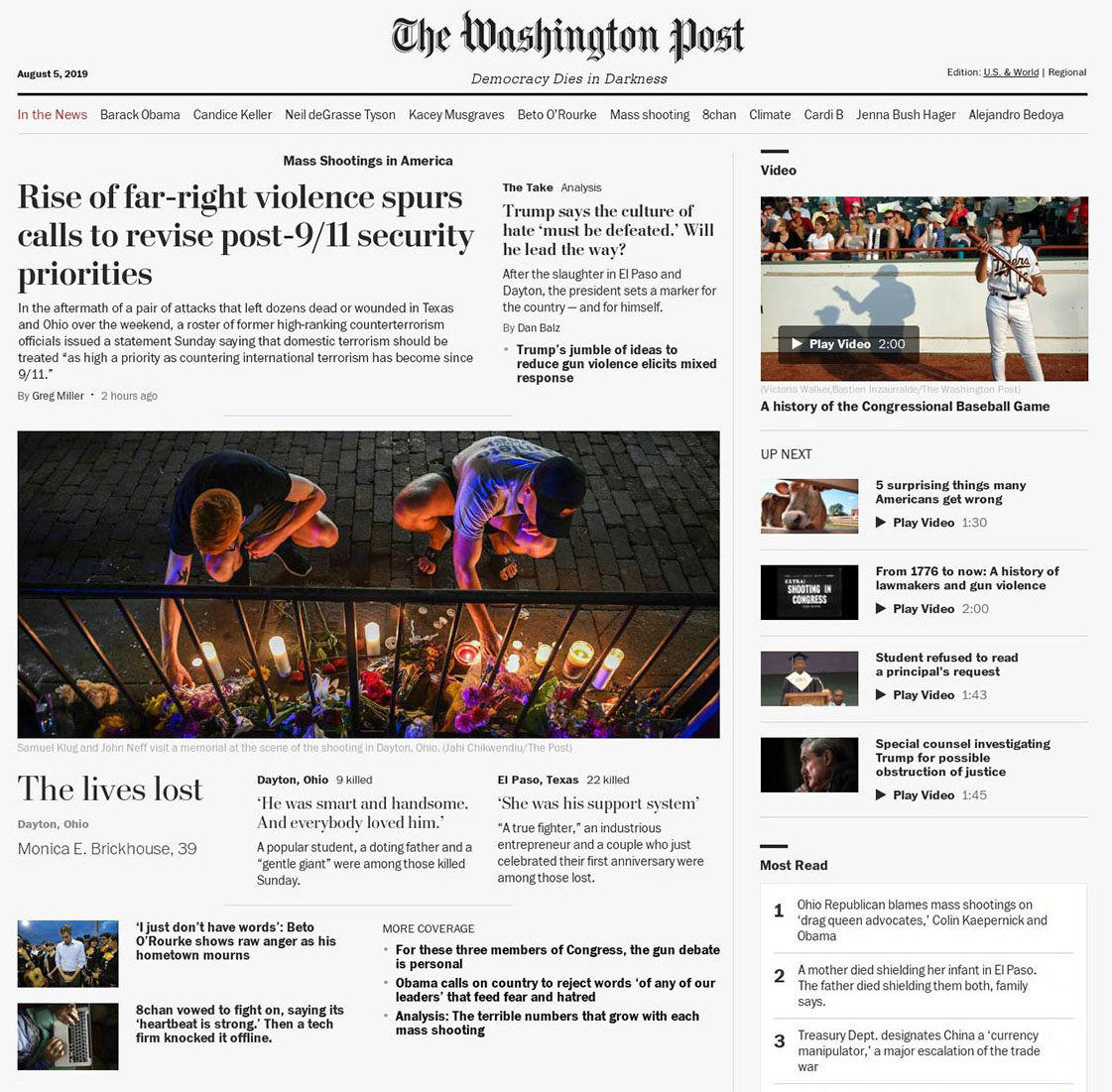 When a pair of mass shootings stunned the nation in August 2019, The Post sought to tell the stories of the people who were slain. Read the stories: El Paso and Dayton 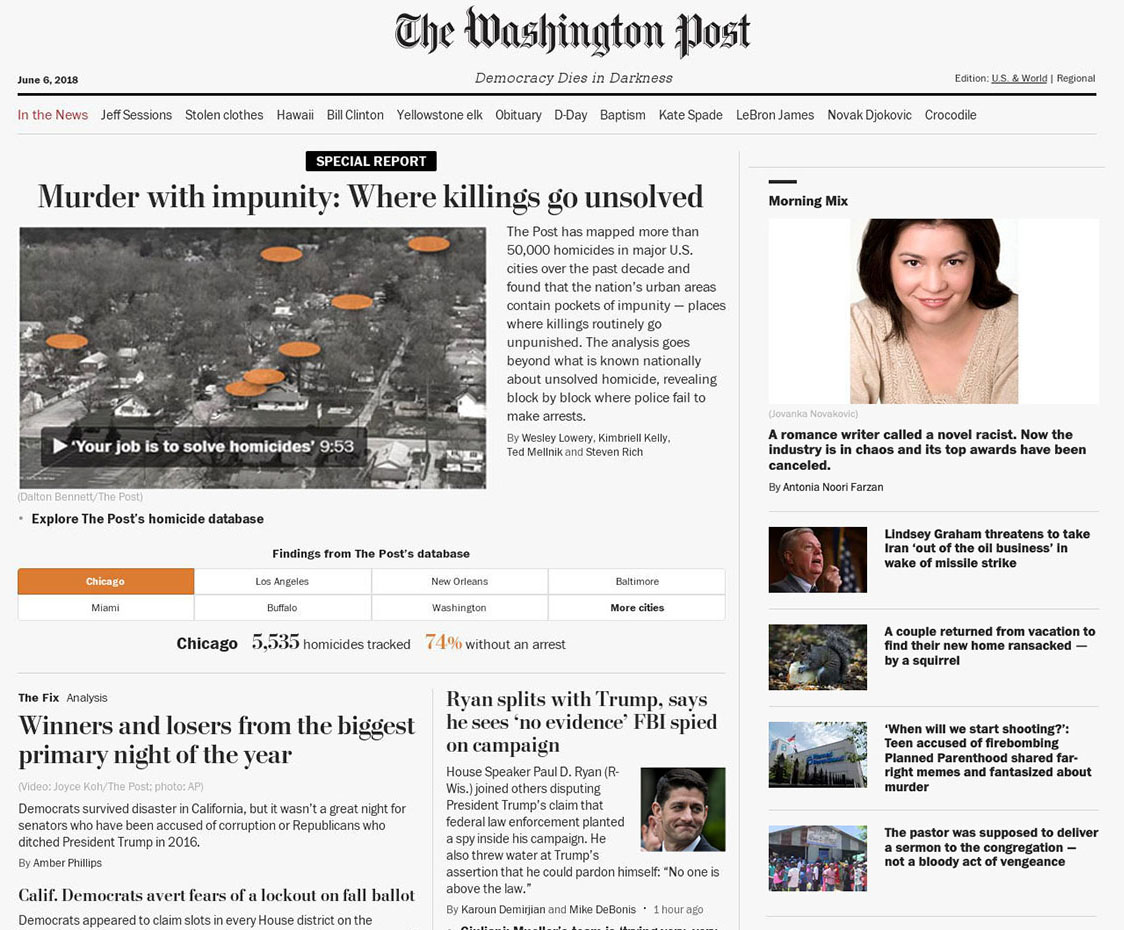 The Post asked a simple question: Where do homicides go unsolved? A team of investigative reporters pored over records to try to find out, and produced this exhaustive — and important — piece of journalism. 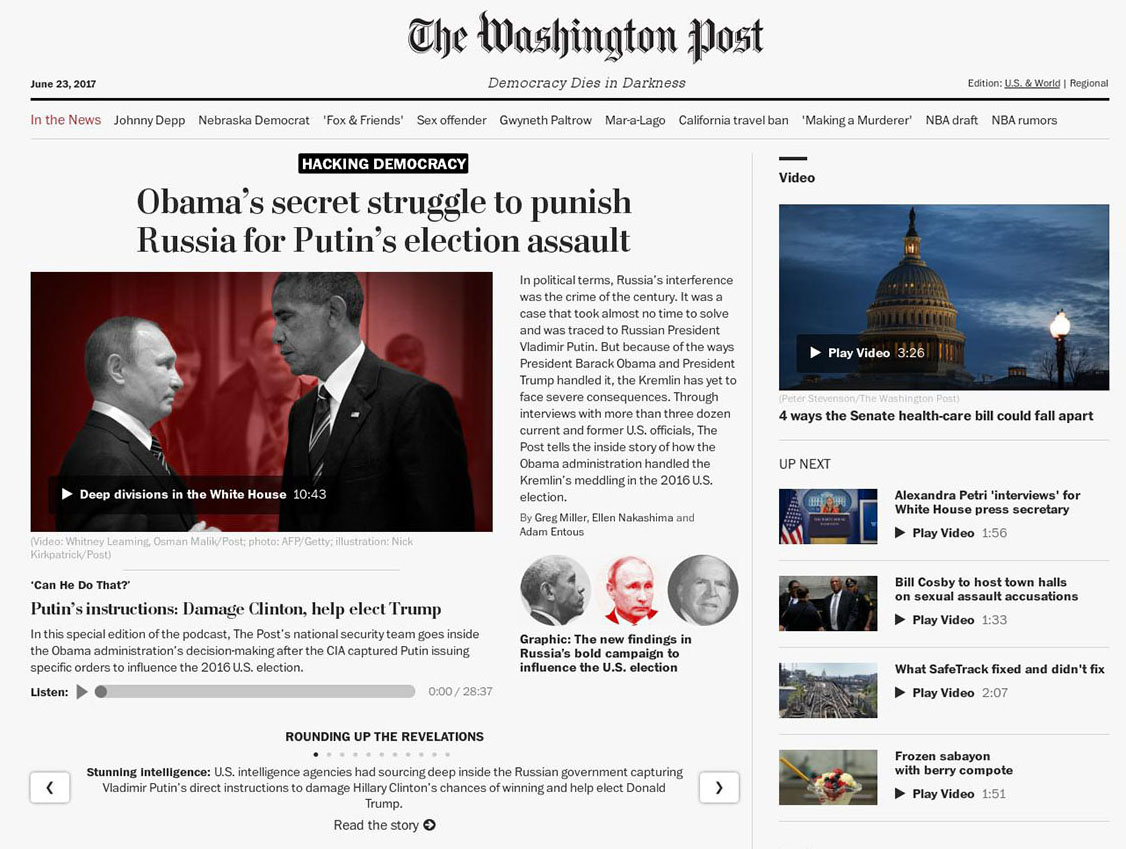 The homepage presentation of an astounding piece of journalism that looks at Barack Obama’s secret struggle to punish Russia for Vladimir Putin’s assault on the 2016 U.S. election. This presentation features a clickable breakout box of the story’s biggest revelations. It includes a custom audio player that I developed for a special episode of one of The Post’s popular podcasts, “Can He Do That?” 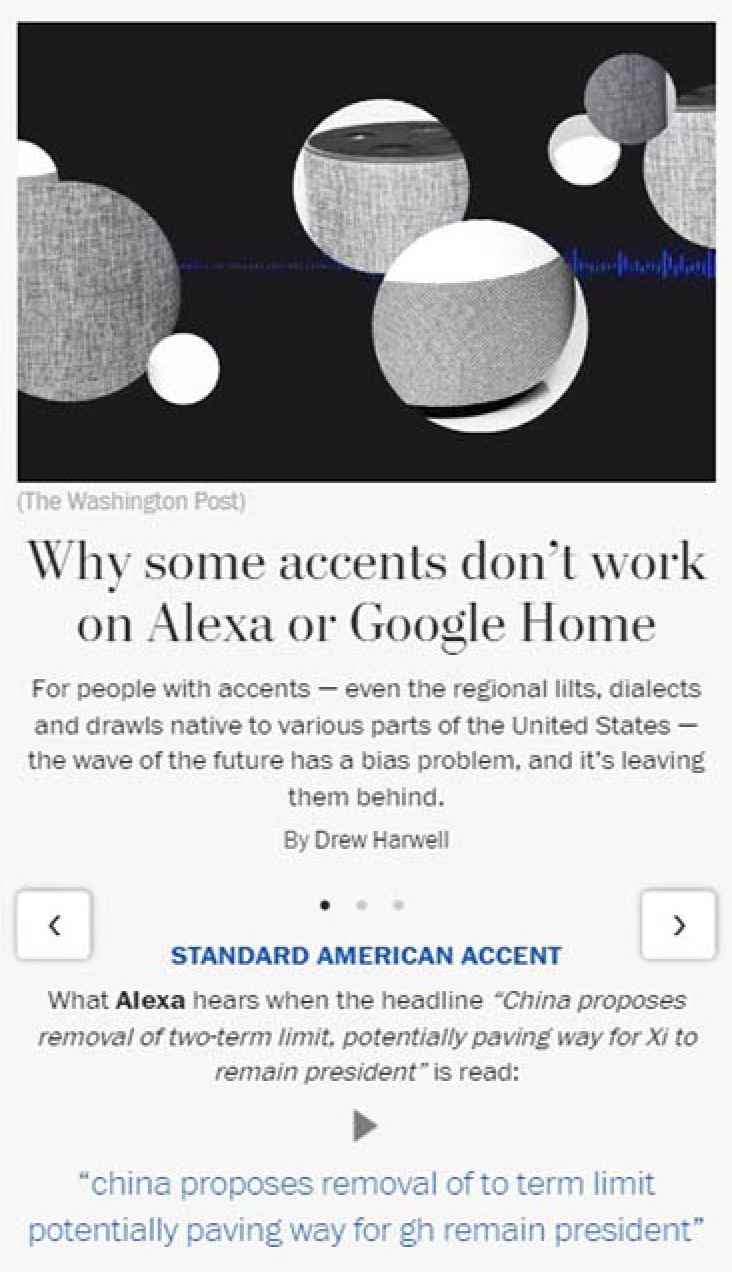 A homepage display story on why Alexa can’t understand your accent. I coded the audio player component on deadline. 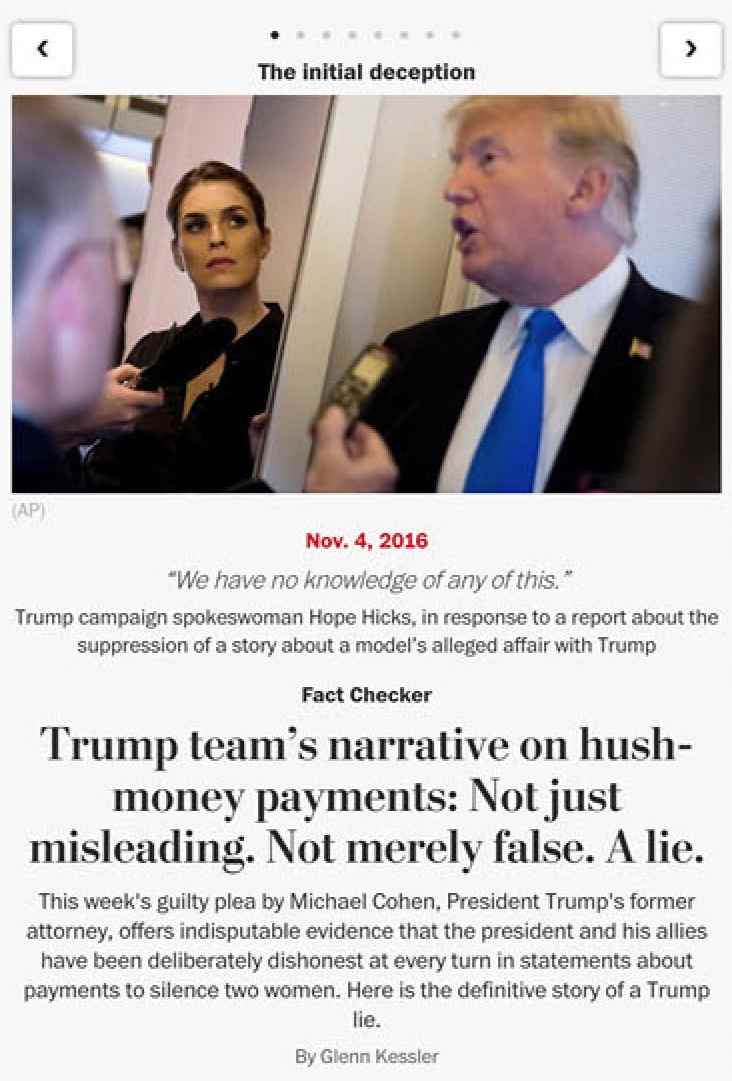 A breakdown of an indisputable lie by President Trump (the display element, a walkthrough of the lie, was produced on deadline). 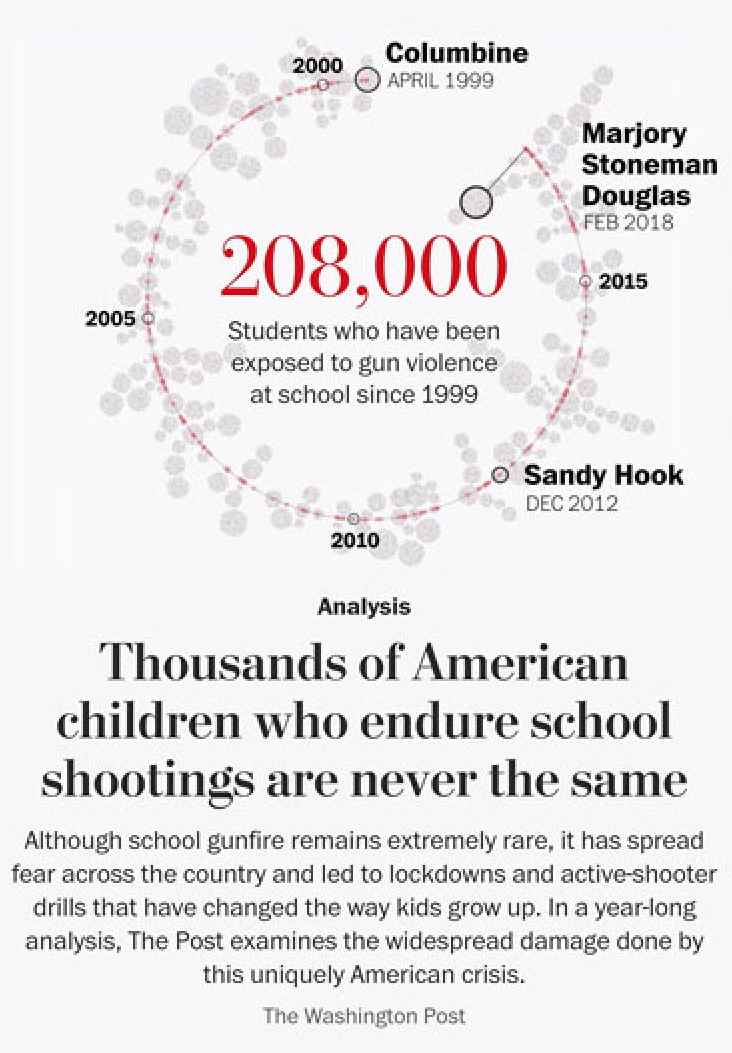 The lasting effects of the 1968 riots on Washington.

A promotional display for the last episode of The Post’s excellent podcast, “Moonrise.”

What are students taught about slavery? It depends on where they learned it. This display features an excerpt from a 1960s-era textbook from Virginia. Users can hover on it to see it more closely. 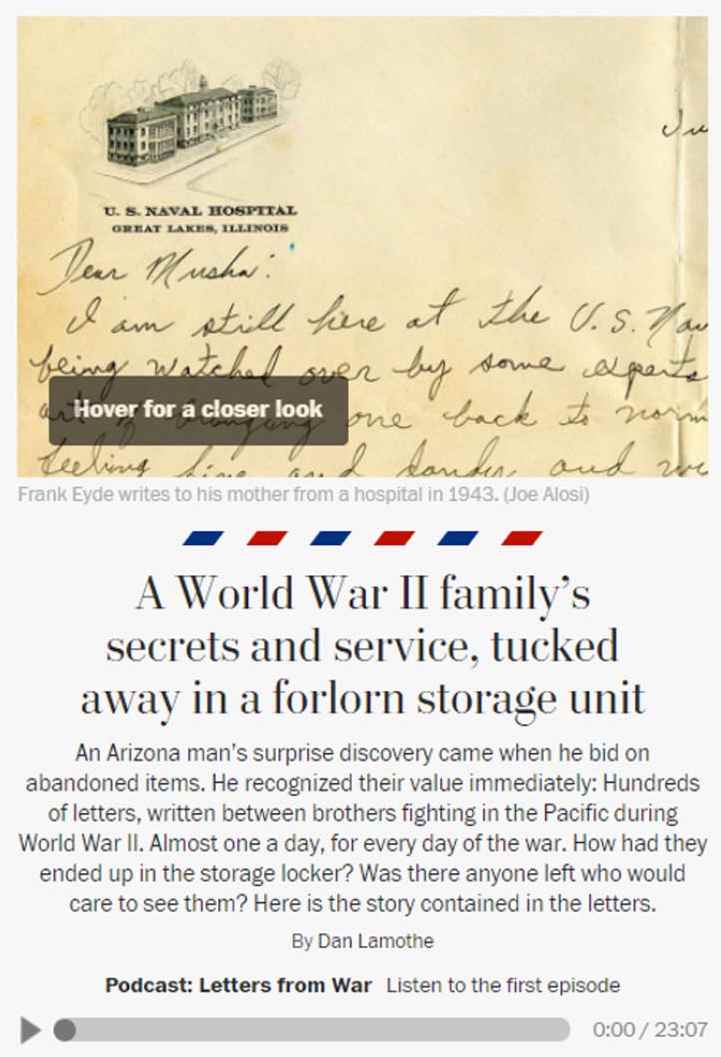 A bundle of WWII-era letters found in a Phoenix storage unit (with an interactive component I created that allows readers to zoom in on a letter right from the homepage). 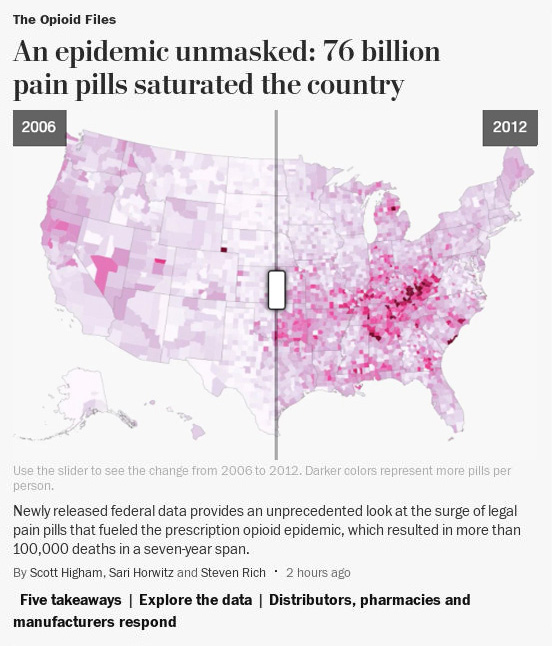 How has the opioid crisis wracked America? The Post did an in-depth analysis. For the homepage, I created an interactive slider that shows the changes from 2006 to 2012. 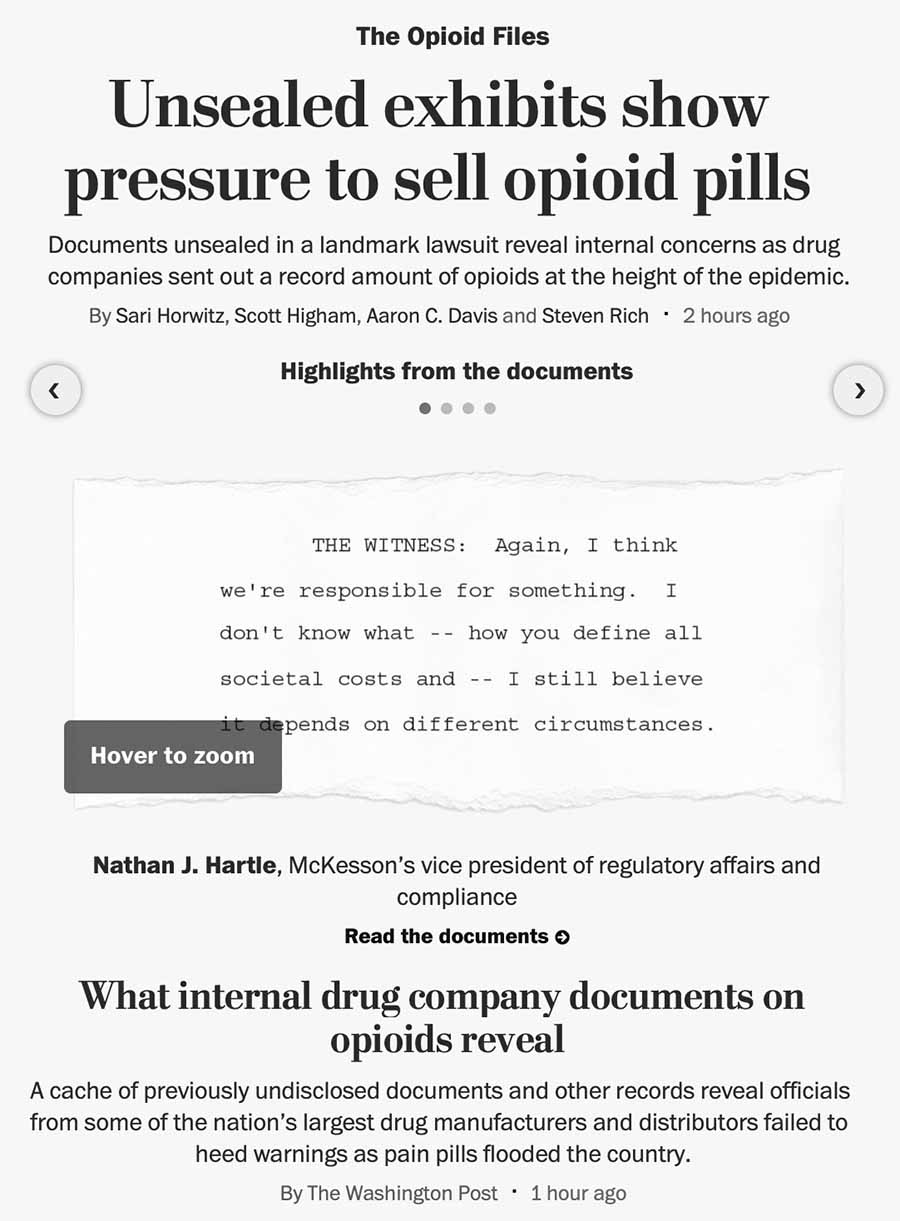 Emails from pharmaceutical sales teams, acquired by The Post, show an indifference toward the opioid epidemic. The results would be devastating. This display, coded on deadline, features an interactive stepper with the ability to zoom in on a document. 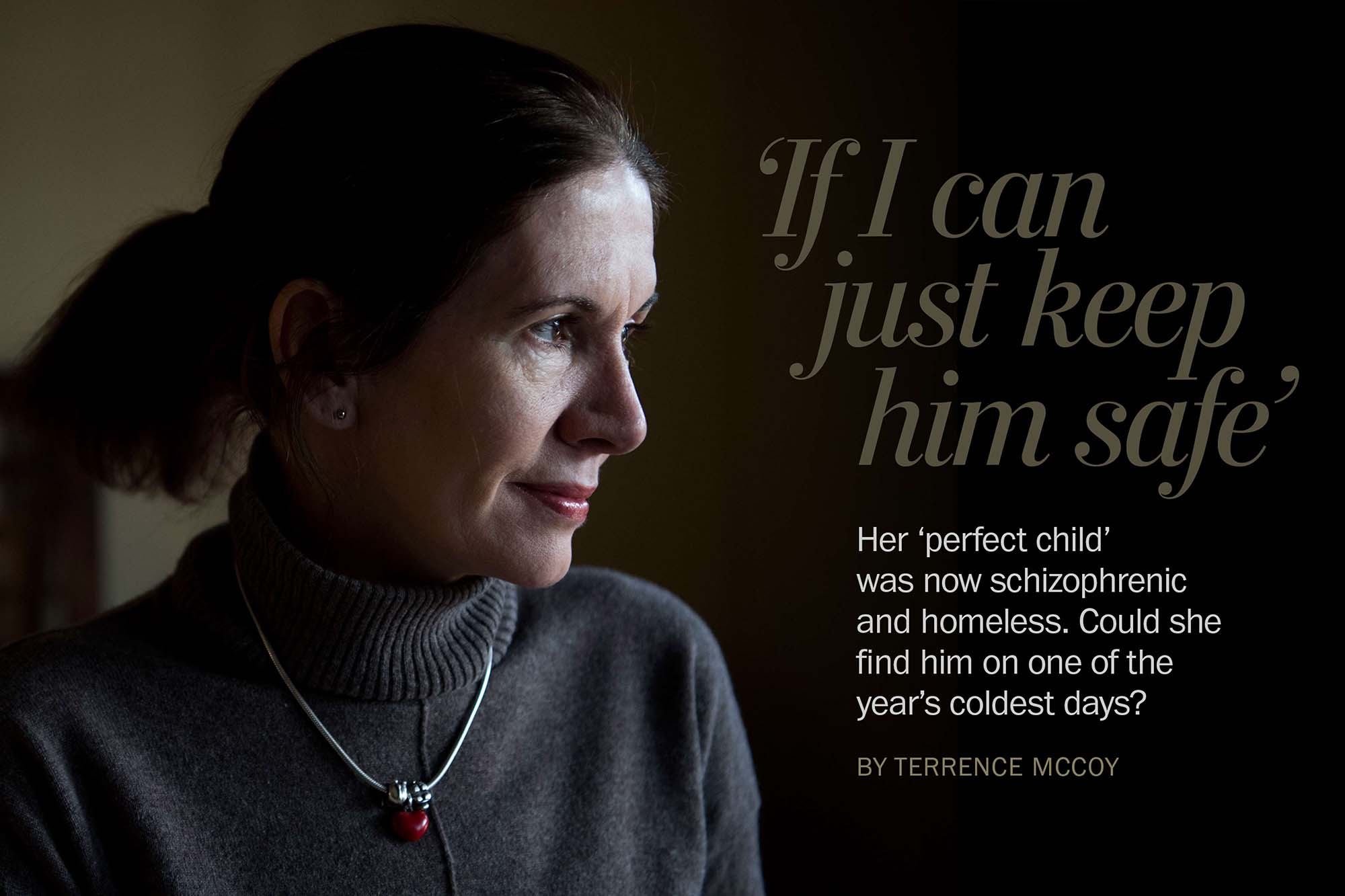 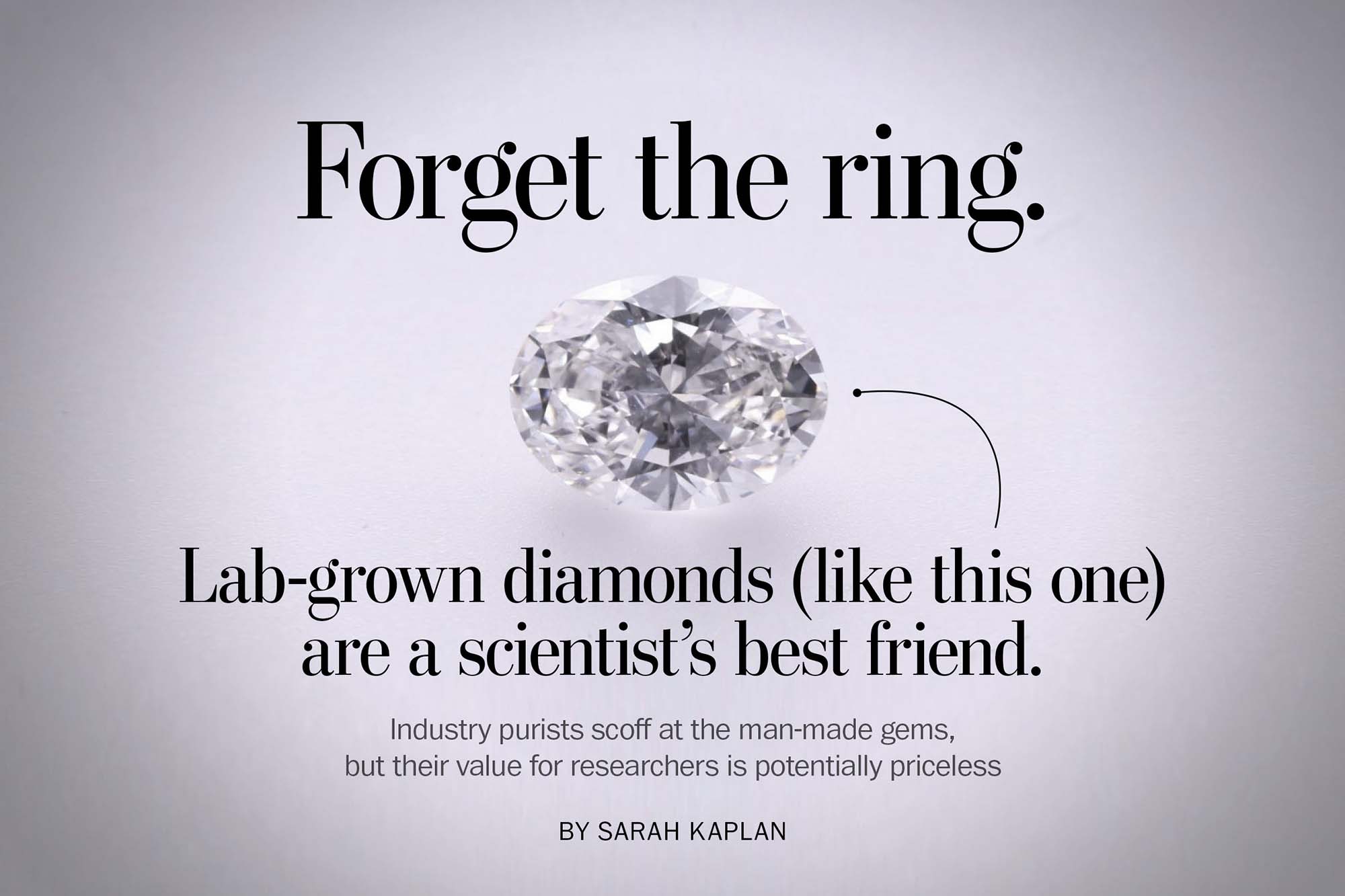 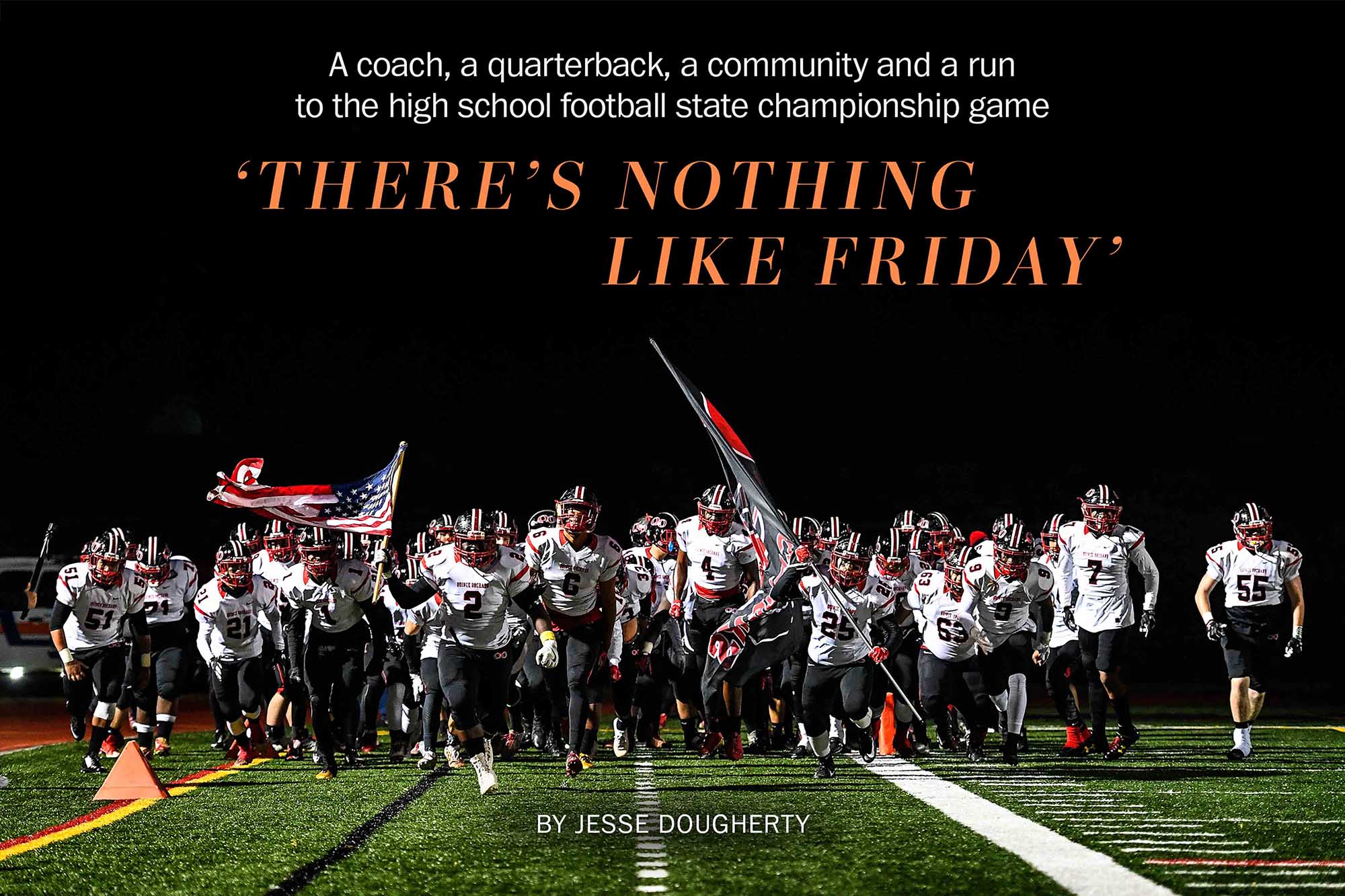 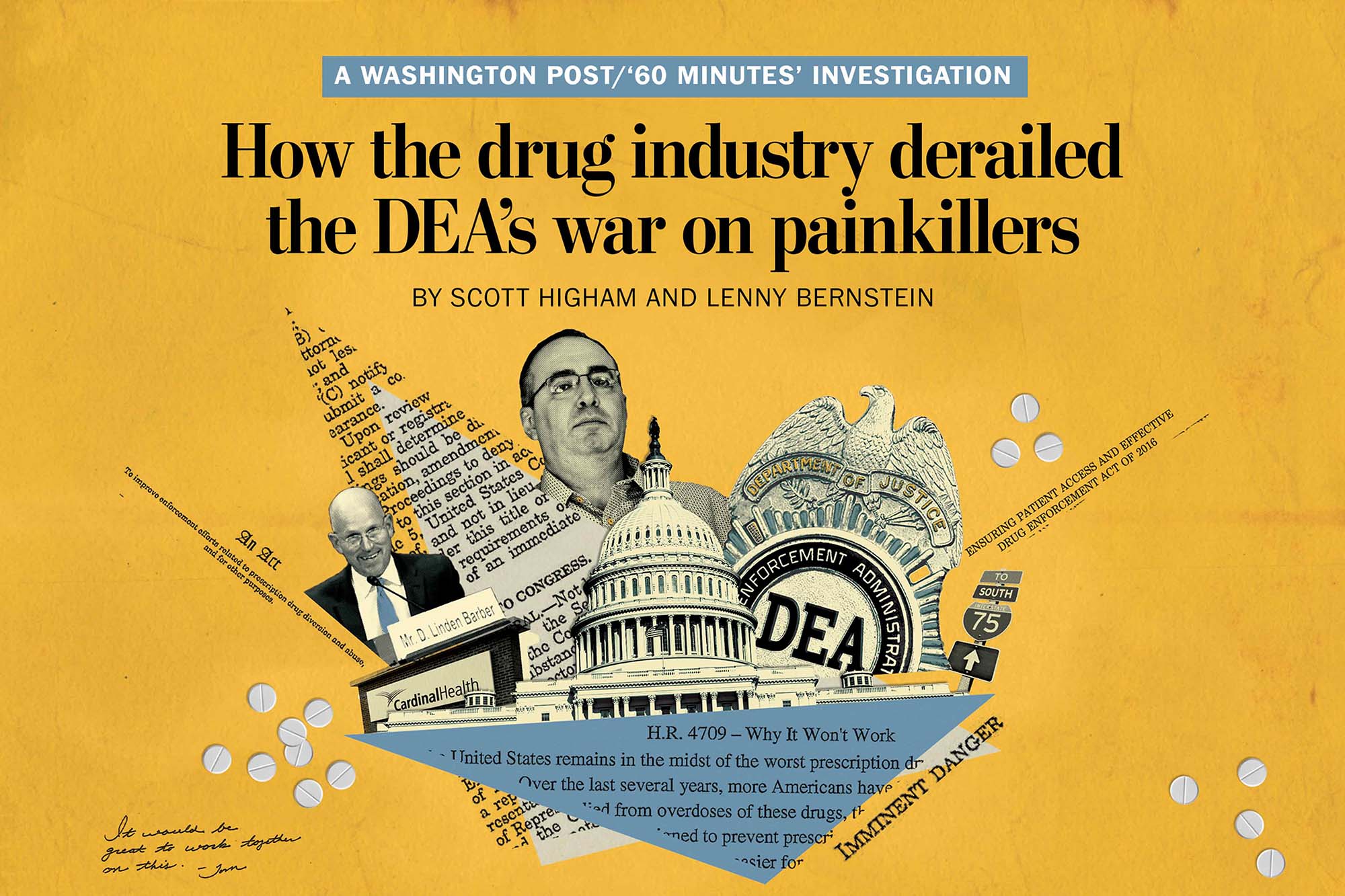 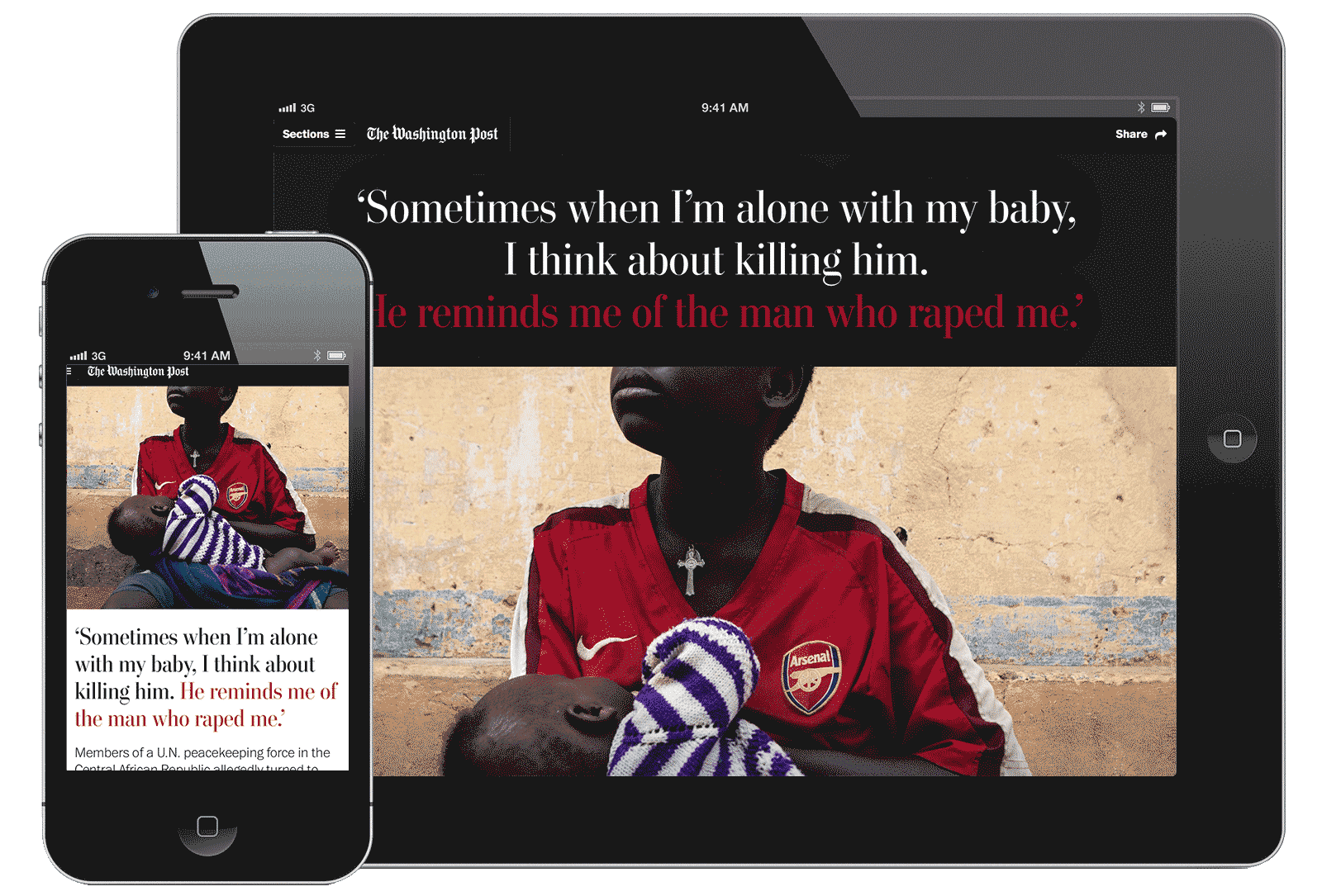 The peacekeepers were there to protect. Instead, some of them are accused of sexual predation, betraying their duty to protect. Powerful story by Kevin Sieff, with photos by Jane Hahn. 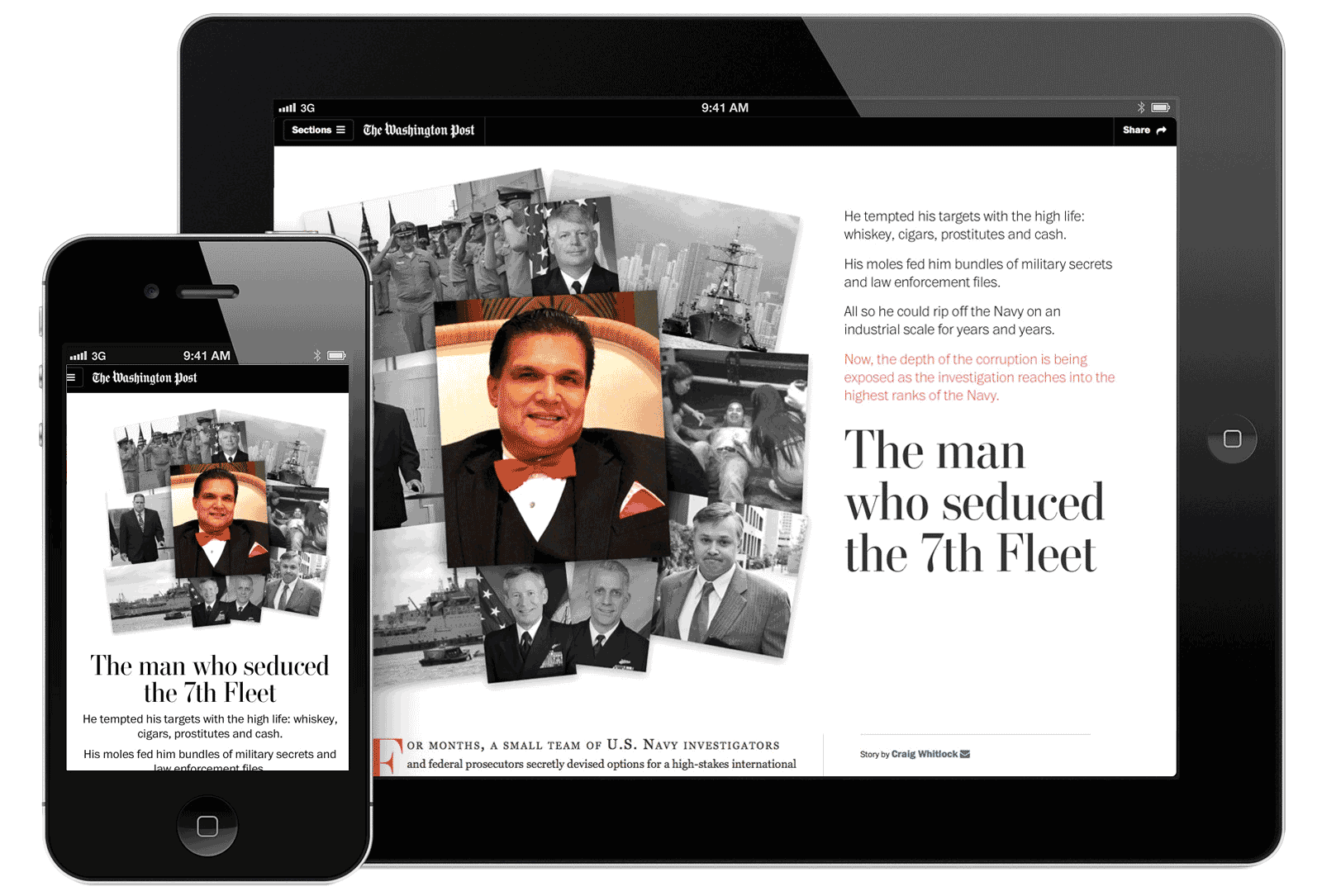 Craig Whitlock explores how a contractor used bribes to corrupt scores of high-ranking officers in a scandal that could shake the very foundation of the U.S. Navy. 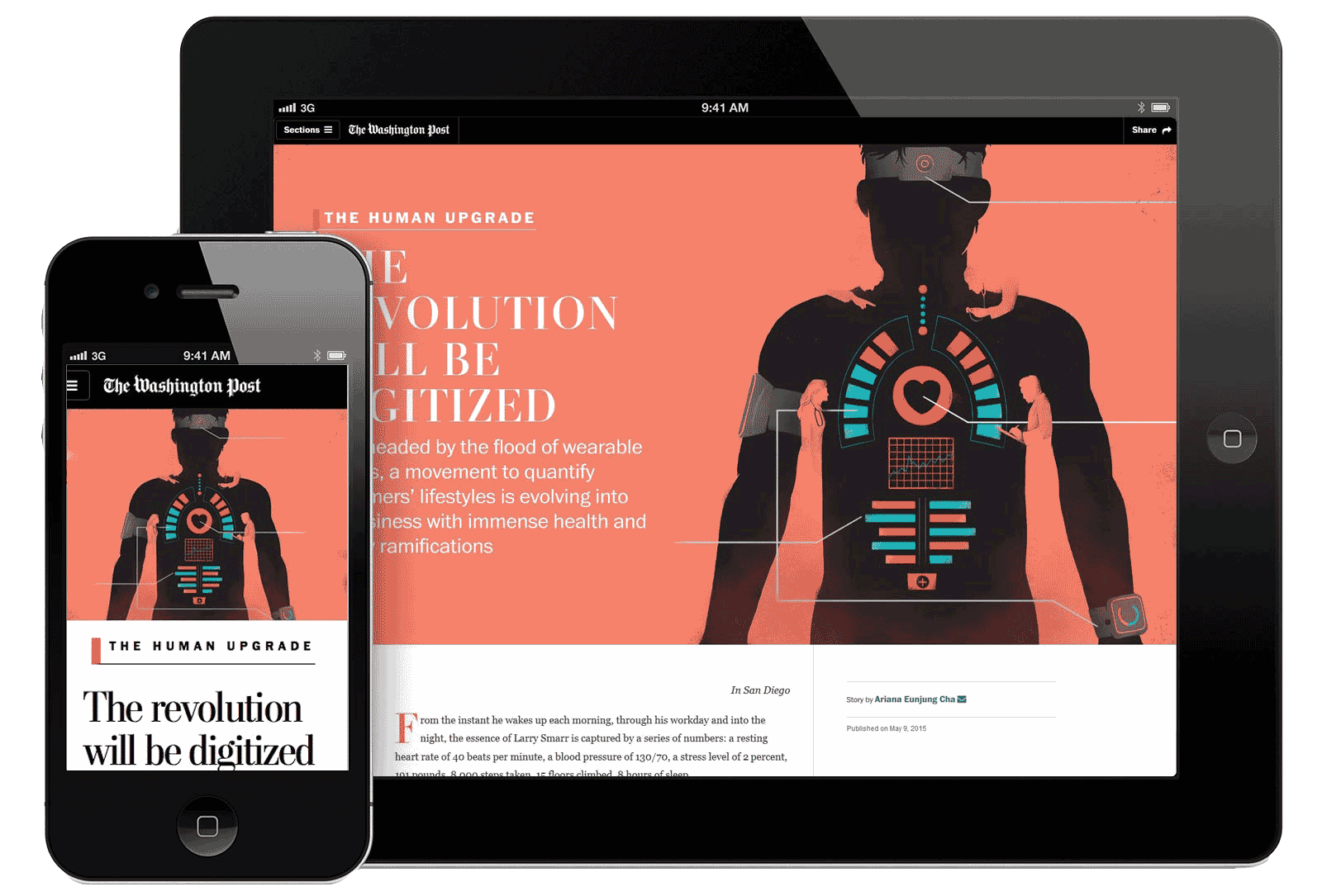 Ariana Eunjung Cha explores the rise of wearable gadgets and its effects on health, commerce — and privacy. Part II of the four-part Human Upgrade series. 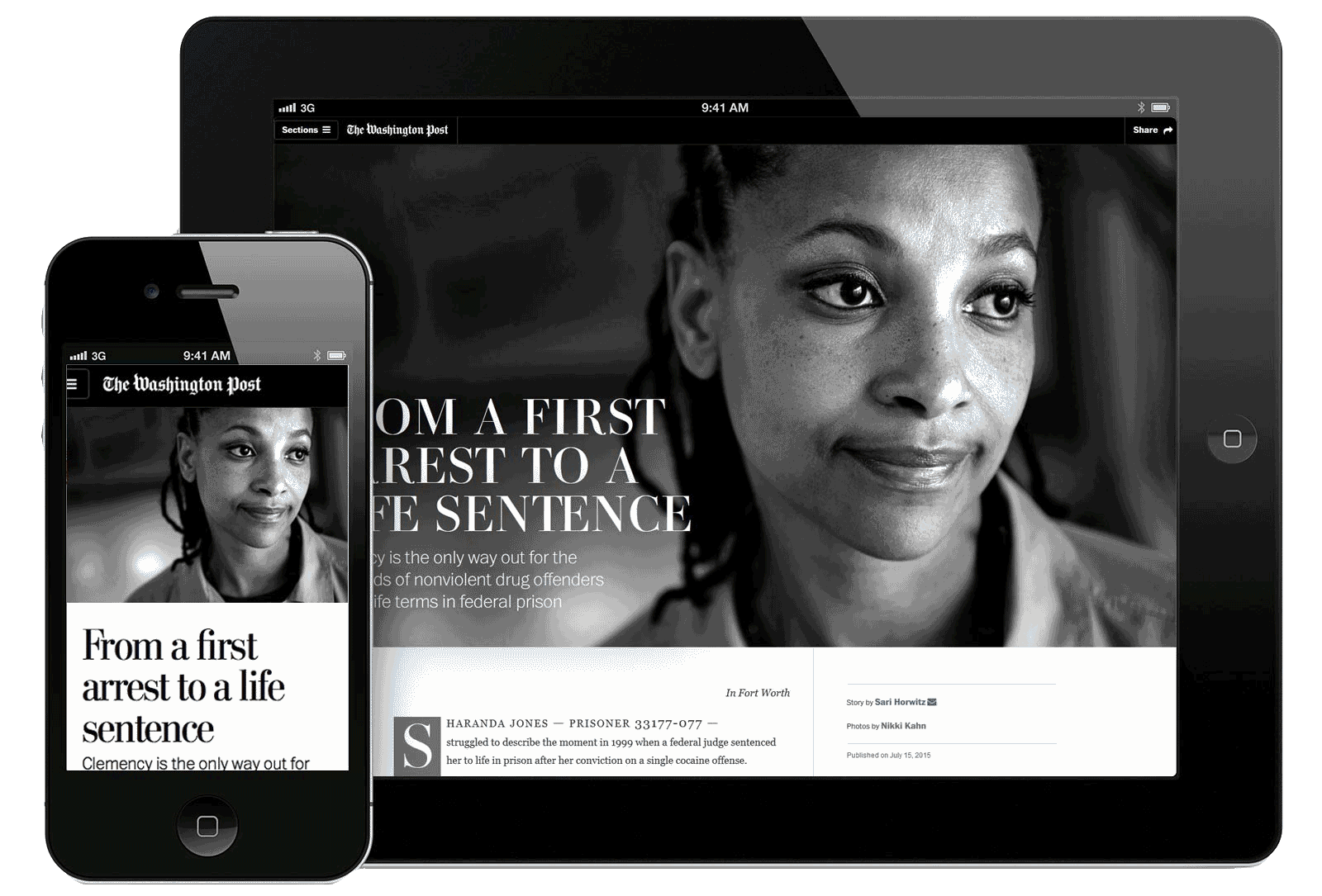 Sari Horwitz tells the story of Sharanda Jones, a first-time, nonviolent offender who was sentenced to life in prison for a single cocaine sentence. This story was one of the eight-part Unwinding the Drug War series. (Update: Jones was granted clemency by President Obama in December 2015.) 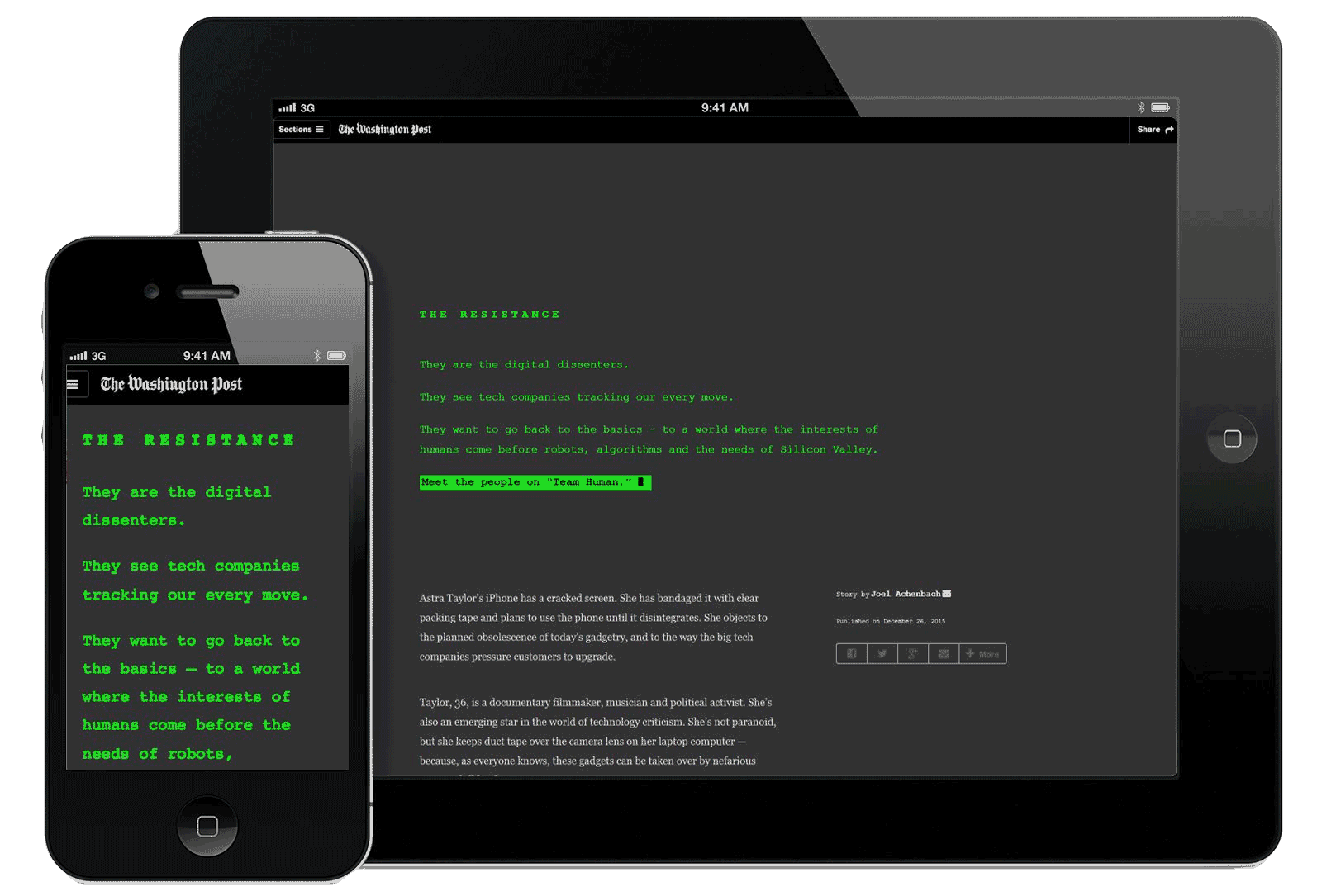 This two-part series on the people who are disenchanted by failed promise of the tech revolution was great fun to work on. We decided to pursue a minimalist, stripped-down, and in some ways bleak presentation to match the tone of the stories. It was a great opportunity for me to teach myself about CSS animations — and to hack The Post’s WordPress template. 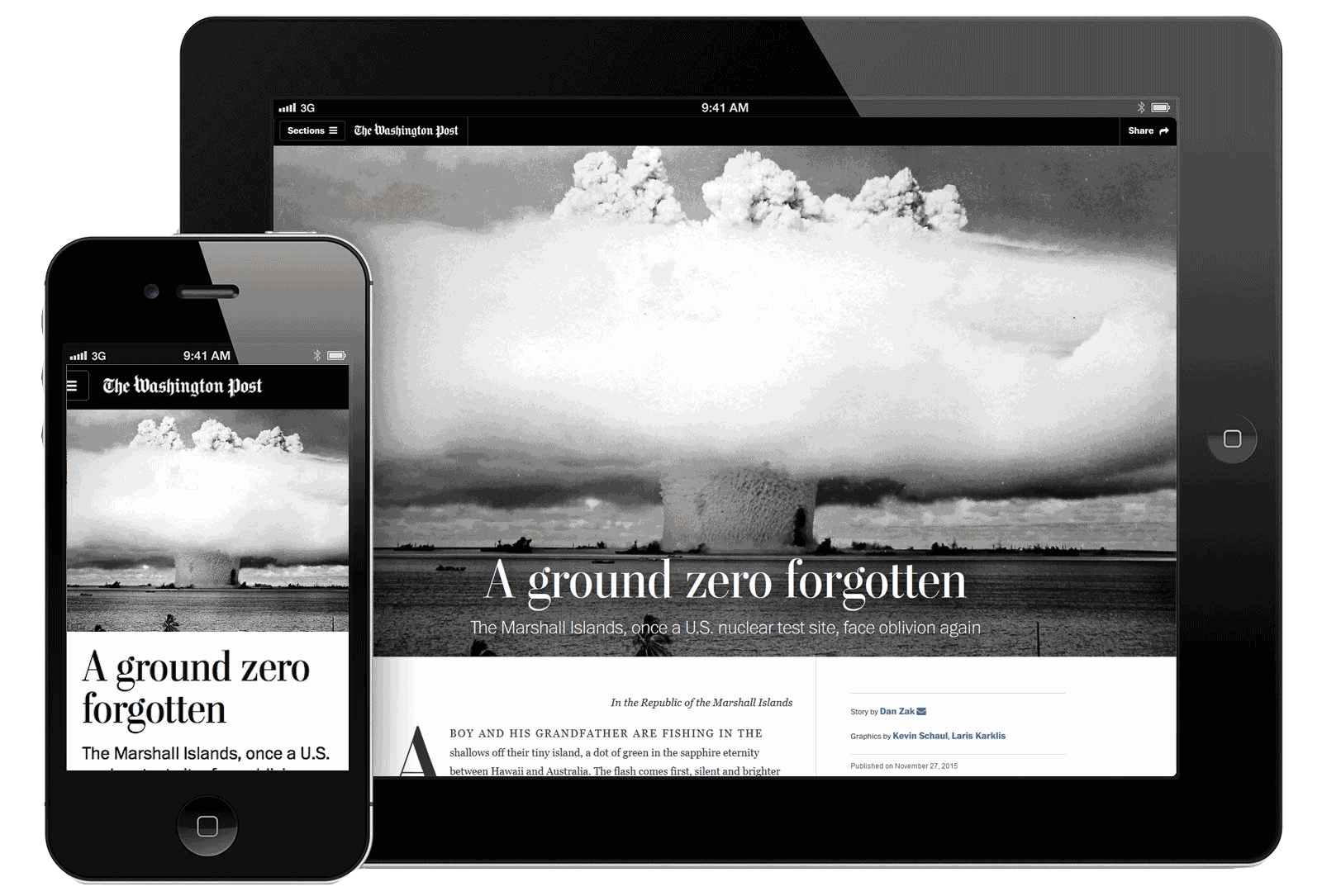 The Post’s Dan Zak traveled to the Republic of the Marshall Islands — the site of hundreds of Cold War-era nuclear tests — to tell the story of the struggles the islands face today. 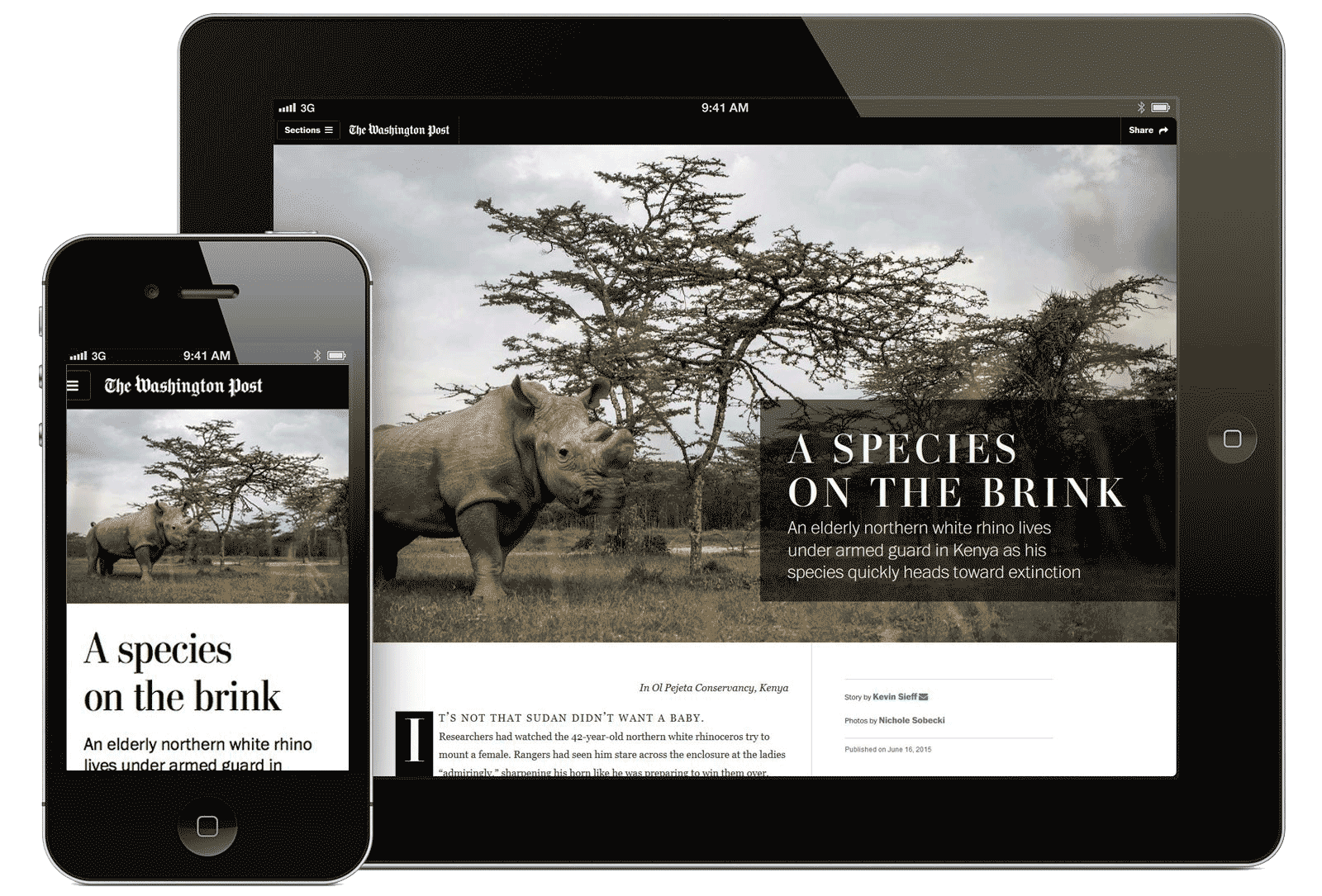 He’s the last male northern white rhinoceros on the planet, and he lives under armed guard in Kenya. Will he be able to reproduce with one of the few females of his kind? Or will his species vanish into just a memory? 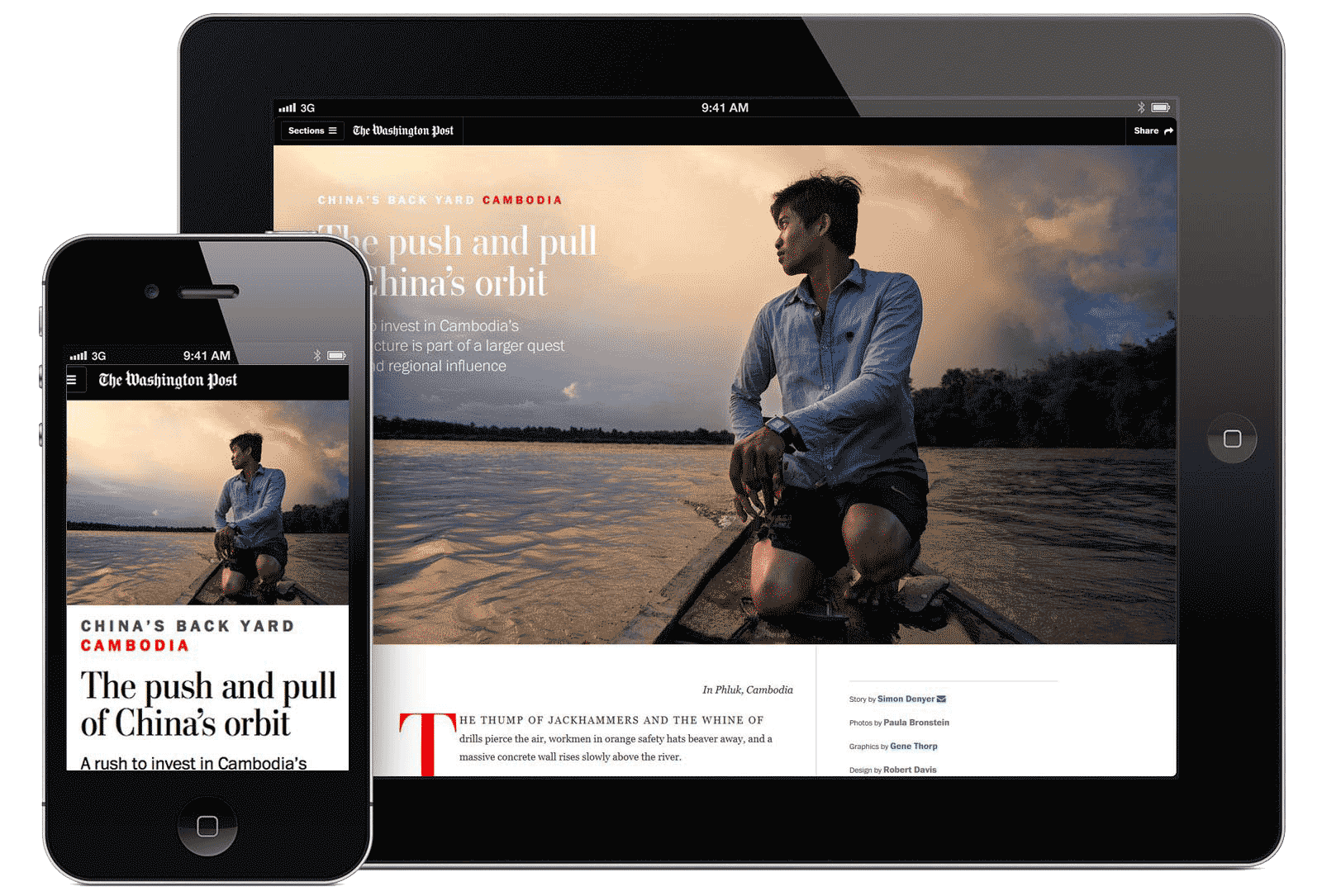 China is investing heavily in building roads and bridges in Cambodia in hopes of currying favor with its neighbor. Part of the China’s Back Yard series that examines the country’s regional power plays. 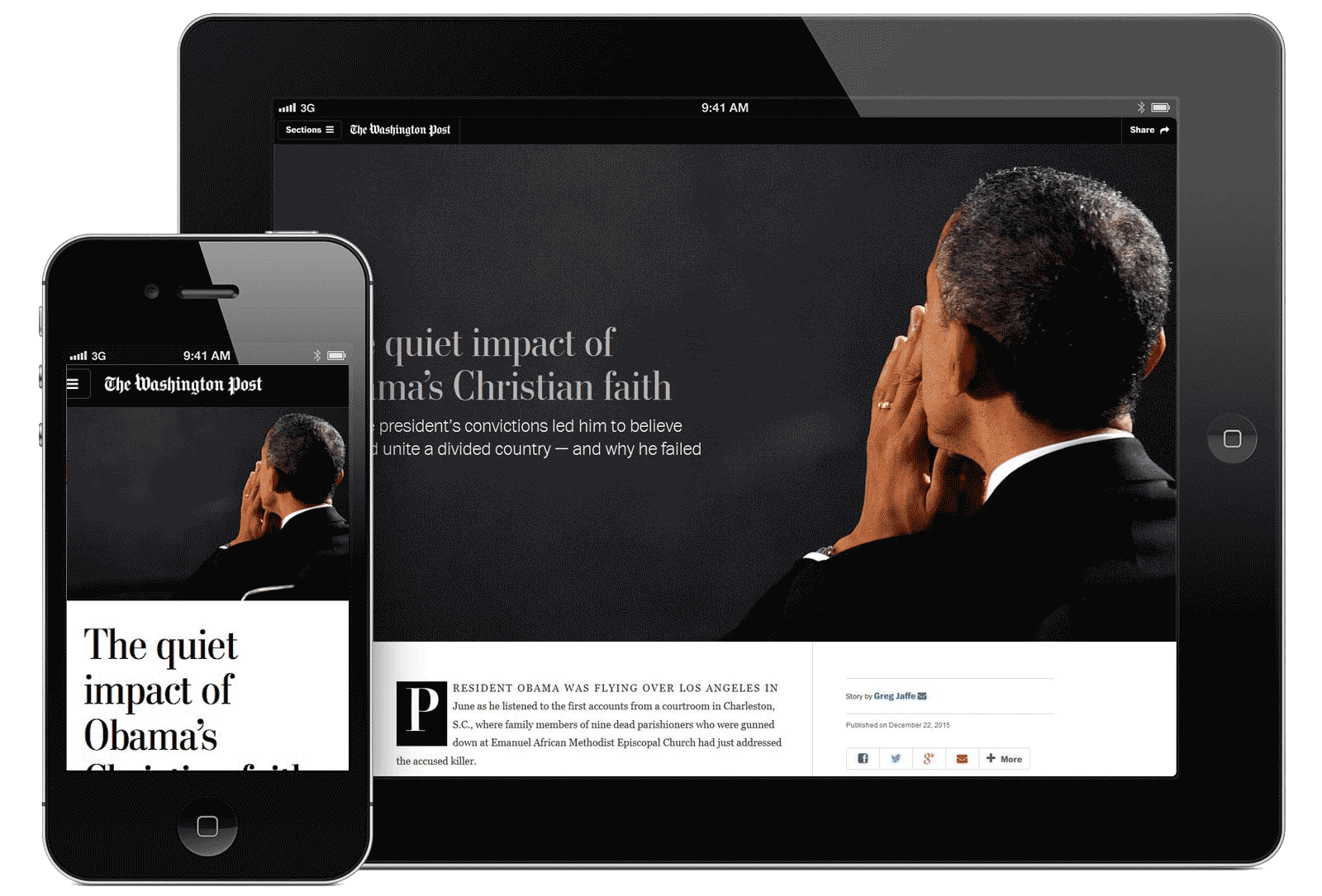 The Post’s Greg Jaffe examines the roots of President Obama’s deep Christian faith — and how he failed to unite a divided country.

After the momentous Supreme Court decision upholding same-sex marriage, Robert Barnes takes us back 20 years to give us the context behind the struggle. I’m quite fond of this project, for it was produced on an extraordinarily tight deadline.